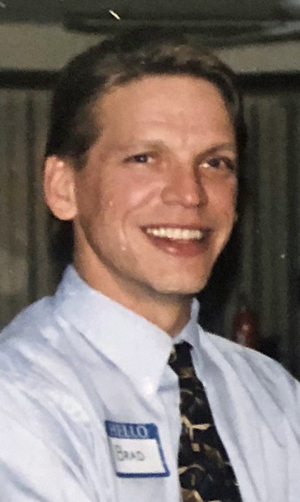 Brad lived in New Franklin area most of his life. He spent his youth playing sports and swimming at family owned Manchester Swim and Tennis Club. He graduated from Archbishop Hoban High School in 1980. He followed in his father’s footsteps to earn a Mechanical Engineering degree from the University of Toledo with his twin brother, David Martin Jacob. He worked with his father and other family members at Vulcan Machinery Cooperation in Akron as the Director of Engineering. He and his brother Dave eventually took over the company from their father to become co-owners of Vulcan Machinery, making their father proud beyond words.

Brad raised two wonderful children in Canal Fulton and Clinton with his former wife, Marianne Schubert. He was a devoted father to Lee Catherine Jacob and Maxwell Joseph Jacob who he loved with his whole heart. Brad was passionate about all music, but punk rock held a special place in his heart. He passed that love of music onto his kids, where they found amazing communities of people though that love they were taught from their father. He was thrilled to become a doting Papa to Brodie Doris Bentley. They loved each other immensely. He also loved being “Odie (other) Papa” to his great nieces Kamryn and Reese Jacob.

He was preceded in death by his beloved parents, Ralph Joseph and Juanieta Luisa Jacob. He is survived by his children, Lee C Jacob, Max J Jacob; his cherished K9, Drake;siblings, Doug, Dan, Lisa (Joe), Dave (Holly), and Jeff Jacob. He will be greatly missed by many of his nephews, nieces, great nieces and great nephews. His family will always remember Brad for his love of a good (and very large) bonfire, his generosity, superior intellect and willing to goof around anywhere, anytime.

A celebration of life will be held at a future date, when we are able to throw a proper party that Brad would approve of.

Remembrances or donations can be made in Brad’s honor to the Ardmore Foundation, which the Jacob family has been involved with for many years. Or the Cystic Fibrosis Foundation, as his granddaughter was diagnosed with Cystic Fibrosis at an early age.

To order memorial trees or send flowers to the family in memory of Bradley John Jacob, please visit our flower store.