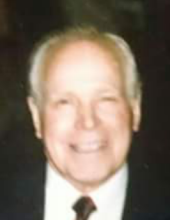 James S. Donald Sr, 93, passed away Dec. 29 at home of natural causes.
James was a lifelong resident of Akron and member of First Congregational Church. He was born on Berwin St. where he grew up, married and raised his own family. He was a graduate of North High School, class of 1942. He went to work at Remples toy store and was then hired by BF Goodrich. Soon after he became part owner of the Newton Brass Foundry in Barberton, a company started by their father in the early 20's, with his brothers John and Rob and sister Flo. James was your typical blue-collar worker and continued to help manage the business until he retired. One of his favorite pastimes was ballroom dancing with his wife. He also enjoyed being with family, watching and talking about sports, a love for animals, and golfing. He was able to travel with his wife Juanita to many places and especially enjoyed Sanford, Florida. He will be missed by many.
James was preceded in death by his loving wife of 60 years Juanita. He is survived by Michaelle (Danny) Rhoads, Shayne (Marianne) Donald, James (Theresa) Donald Jr, Grandchildren Dana (Rich) Motts, Dennis Padgitt, Breighann (Cullen) Stinson, Corbin, Trenton, and Noah Donald, Michael (Jessica) Collins, April (Chris) Barger, and many great grandchildren.
Funeral Service will be Friday, 3:00 pm at HBMoore Funeral Home, 936 N. Main St., Akron (corner of N. Main St. and Mildred Ave.). Visitation will be 1:00 to 3:00 pm at the funeral home. James' final resting place will be Rose Hill Burial Park. In lieu of flowers, memorials may be made to the Food Cupboard at First Congregational Church.
You are invited to hbm-fh.com to view James' tribute wall, offer condolences and share memories.

To order memorial trees or send flowers to the family in memory of James S. Donald, Sr., please visit our flower store.