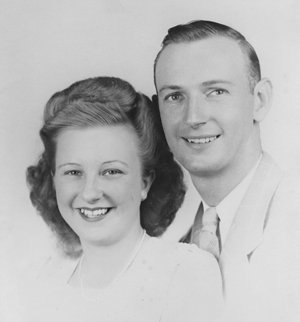 MANCHESTER--The "teeny tiny woman" has passed away. Louise Fann, who enthralled a generation of children at the Manchester Library as the "Story Lady" with animated readings of children's books, such as "The Teeny Tiny Woman," died December 26, a month shy of her 92nd birthday. A private service was held at the Manchester Cemetery.

Louise Harding grew up in Firestone Park, where she attended Voris School, Garfield High School (a straight-A student, Class of 1945), and Akron Baptist Temple, and skated on the pond at Holy Cross in the winter. After high school, she was the secretary at Lincoln School for six years until leaving to raise 3 sons (having married Herb Fann, the "mailman" in the Lincoln School area, in 1947). From 1962 to 1982, Louise was the assistant librarian and "Story Lady" at the Manchester Library. In retirement, she and Herb enjoyed visiting Amish country craft stores and restaurants. She loved to decorate her home and entertain family and friends.

Louise was preceded in death by her sisters, Eileen and Evelyn; her son Jerry in 1981; her husband of 51 years, Herb, in 1998, and almost all her dear friends and neighbors. She is survived by son and daughter-in-law, Tom and Patty, son,  Rick; and several grandchildren, great-grandchildren, nieces, and nephews. Her grit and determination to remain in her beloved home, in spite of declining mobility, will long be an inspiration to those who knew her. Another member of the Greatest Generation is gone. We will miss you, Mom.

The family wishes to thank the caring and devoted staffs of Fairlawn Rehab and Nursing Center and Grace Hospice for all they did for Louise to make her comfortable and happy as her life on this Earth drew to an end.

To order memorial trees or send flowers to the family in memory of Louise (Harding) Fann, please visit our flower store.