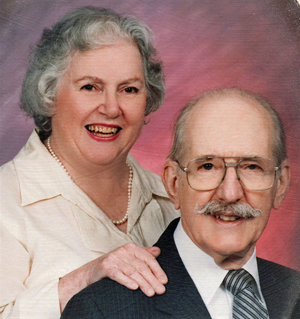 Marianne Boydstun was reunited with her beloved husband and met her Savior face to face on May 22, 2021 at the age of 91. She was born in Queens, NY in 1930 to James and Ann Wade. Growing up in New York City, she graduated from Julia Richman High School in 1947. A prominent part of her upbringing was voice lessons and preparation for the stage.

She sang regularly on New York City radio as a teenager, but her life went in a different direction in September 1948 when she married Loren Boydstun. They were together nearly 70 years before his death. They moved first to Washington state before returning to White Plains, New York a few years later. Together they raised 5 children in a home frequently filled with singing. The family would sing in the car, around the Christmas tree, and often sang the Doxology before dinner. Loren and Marianne moved to Ohio in 2012 to be closer to family.

As adults, both Loren and Marianne made fresh commitments to Christ. That faith defined much of her adult life. After her children were grown, she attended Nyack College in Nyack, New York where she studied Bible and theology for several years. She was very creative and active in her church in many ways, including choir and soloist, event organizer, speaker, Bible study leader, decorator and seamstress. She constantly taught creativity to her children through her example. By often reading to the family, Marianne encouraged the children to love reading and the enjoyment of books. Her smile and cheerfulness will be greatly missed.

To order memorial trees or send flowers to the family in memory of Marianne Boydstun, please visit our flower store.